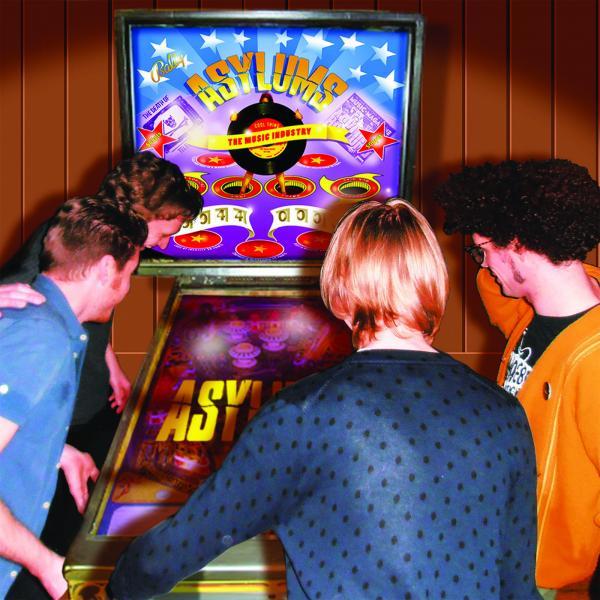 Asylums want to take you on a trip…back to the days of chainsaw guitars and chaotic fun! They release their debut EP ‘WET DREAM FANZINE’ and the new single of the same name on February 23rd via on their very own label, Cool Things Records.

The ep features the vigorous title track, in which the band take a swipe at sex and the internet, alongside their two previous DIY blasts of explosive Southend fuzz. The Death Of Television introduced them in a perfectly formed 1 minute and 20 seconds of sharp, angular edges and had The Line Of Best Fit describe them as ‘a DIY band, but not as you know it. Somewhere between a forceful wave of 90’s pop punk and Britpop, they're entirely eccentric and entertaining’

The smash n’ grab hooks of ‘I’ve Seen Your Face In A Music Magazine’ followed. By now the likes of Radio1 and XFM were playing them and NME, Clash, Loaded, Louder Than War and

Subba Cultcha were writing very very nice things about them. Headline shows, club nights plus a tour with Cobain favorites The Vaselines proved unequivocally that Asylums are an utterly glorious and furiously unstoppable live band. And, aren’t they the very best kind?

A band steeped in 90’s indie and the US underground, their catchy, thoughtful odes to isolation, commercialization and loss of innocence together with gigs gigs and more gigs - plus homemade videos staring sock puppets, of course - have helped them build a fanbase and a community, and, all of this, with no…social…media…not so much as a tweet was heard from them… til…now!!!

The band will be making their first, tentative steps into the world of social media in 2015. Concentrating to date on building a fanbase, a community, playing as many shows as possible and getting their music to people they think may appreciate it enough to play it on the radio or write about it may seem unusual these days but the band felt they’d wanted to have something to talk about rather than trying to build followers with instagram photos of their dinner. Revolutionary, we know; Luke; “None of the bands we loved growing up had social media, so we thought we’d hold off using it as long as possible. We wanted things to build organically and for people to bring their mates to shows, to have something happening for the right reasons. We want to continue that ethos using social networking and just make it that bit easier for people to find us”